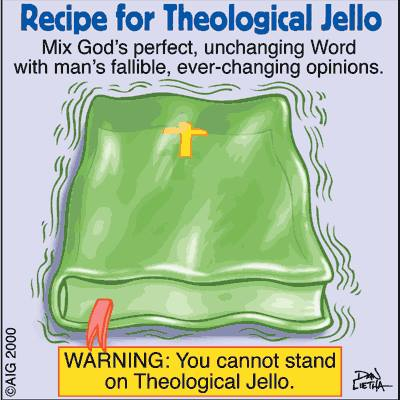 When the apostles were asked by the Lord who they thought He was, Peter replied that He was the Christ, the Son of the living God (Mt. 16:16).  In response to this confession, the Lord said, “Blessed are you Simon Barjona, because flesh and blood did not reveal this to you, but My Father who is in heaven.  I also say to you that you are Peter, and upon this rock I will build My church; and the gates of Hades will not overpower it” (Mt. 16:17-18).

The truth that Jesus is the Son of God is the rock to which the Lord referred in this statement, and this confession was the rock upon which the church was built.  In 1 Cor. 3:11 Paul declared that there can be no other foundation than Jesus Christ.  Apostolic teaching was focused on the fact that Jesus is Lord, and that He has all authority in heaven and on earth.  This was the solid ground on which the church stood, and on which it grew so rapidly in the first century.  This continues to be the solid ground upon which faithful believers stand still today.

Unfortunately, there are many today who are not content to stand on the rock-solid foundation which the apostles laid in the first century.  One need only tune in to religious broadcasts on television and radio to see that the simple and solid foundation of the first century has been forsaken by many.  The pure and unadulterated message of the gospel has been mixed with human philosophy, political correctness, and human opinion to create what can only be referred to as “Theological Jello”.

We may call it this because the content of much of modern preaching is molded, like jello, to fit the desires and preferences of the church before which it is presented.  One church prefers the message of positive thinking and liberal social positions.  Another prefers the message of tolerance, and the acceptance of all kinds of lifestyles.  It is no wonder that some unbelievers are put off by any mention of the Christian faith.  Even they can see that as it is practiced in many places today it is virtually meaningless.

Many of us enjoy jello as a dessert, and why not?  It is easy to prepare and easy to store.  It can be mixed with a variety of other foods and still retain its appeal.  It is sweet and goes down easy, and it does not sit heavily in the stomach.  Yet, it is little more than sugar and water.  It therefore has very little nutritional value.  As part of a well-balanced diet it may have a proper place, but it cannot sustain good health by itself.

We recognize this in terms of our physical nutritional needs, but we also need to recognize it in terms of our spiritual nutrition.  The scriptures teach us to desire the milk of the word so we may grow with respect to salvation (1 Pet. 2:1-3).  Yet, even this is not enough, for the writer of Hebrews chastised his readers because they were still feeding on milk instead of having graduated to meat (Heb. 5:11-14).  Paul declared that God’s design for the church was for it to be built up by sound teaching so it would not be tossed here and there by every wind of doctrine (Eph. 4:11-16).  We can’t achieve this goal with theological jello.  We can only do this if we remain firmly grounded on the rock of biblical truth.

Paul warned against theological jello in 2 Tim. 2:14-18, when he instructed Timothy to be diligent in order to accurately handle the word of truth.  Others, he said, had strayed from this and had upset the faith of some.  In v. 19 Paul said, “Nevertheless, the firm foundation of God stands, having this seal, ‘The Lord knows those who are His,’ and ‘Everyone who names the name of the Lord is to abstain from wickedness.'”  Therefore, let us not try to stand on theological jello, but only on the unchangeable, rock-solid, everlasting word of God.