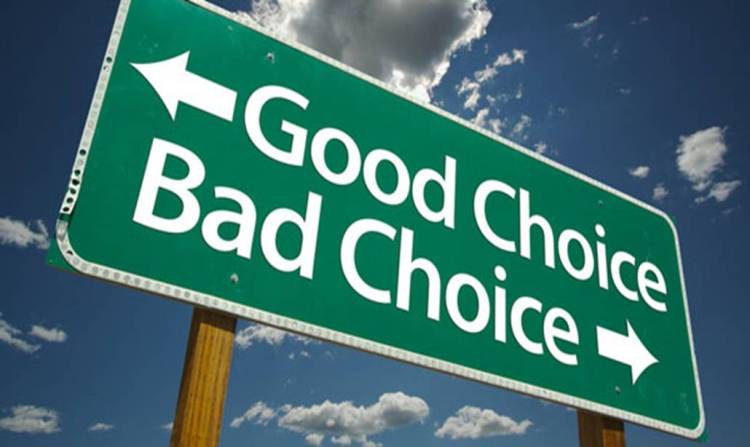 One of the more powerful memes to appear on social media says, “You are free to choose, but you are not free from the consequences of your choice.”  The author of this statement is unknown, but its truth is unimpeachable.  Unfortunately, too many people seem to be unconvinced of it.  The criminal makes the choice to break the law, but often seems genuinely offended that he must pay a penalty for that choice.  The abortion industry thrives because so many choose to ignore this truth.  Even professed believers sometimes get caught up in the mistaken idea that somehow we can avoid the consequences of our choices.

It is obvious that irreligious people have no vested interest in the principle of choices and consequences, but professed believers certainly do.  The scriptures testify to this truth, literally from cover to cover.  Adam and Eve made the choice to eat the forbidden fruit, and they suffered the consequences for having done so.  God punished them and cast them out of the Garden of Eden.  King David made the choice to commit adultery with Bathsheba, and he, too, suffered the consequences of his choice.  The child born from that illicit union died, and the sword never departed from his household thereafter.

In the New Testament, Judas Iscariot made the choice to betray Jesus to the Jews.  At any point up to the very act of betrayal he could have made a different choice, but he didn’t.  When he felt remorse for what he had done, he made another choice.  He chose to take his own life.  Instead of receiving forgiveness and redemption, he sealed his fate, and is now held in universal disdain by all believers.

This is where believers sometimes get caught up in the mistaken idea of avoiding the consequences of our choices.  We understand, appreciate, and desperately depend on the grace and mercy of God who offers us the forgiveness of our sins.  The blood of Jesus Christ, which was shed on the cross of Calvary, washes away our sins when we are immersed for the forgiveness of our sins (Acts 2:38; 22:16).  After this initial cleansing, we are promised that it continues to cleanse us when we sin, if we confess our sins and ask for forgiveness (1 Jn. 1:5-10).

In Jer. 31:34 the prophet quoted God the Father saying that in the time of the new covenant He would forgive the iniquities of His people and He would not remember their sins anymore.  This is a fundamental truth which all believers hold dear.  When God forgives our sins, we are forever spared the eternal consequences of the choices that led to those sins.  However, the fact that God does not remember the sins He has forgiven does not remove the temporal consequences of those sins.

Saying that we are free to choose, but are not free from the consequences of our choices does not negate God’s grace and mercy.  It simply acknowledges the fact that our actions have physical as well as spiritual consequences.  Let us keep this truth in mind every day.  Perhaps doing so will help us make the right choices instead of the ones that will lead us into sin.