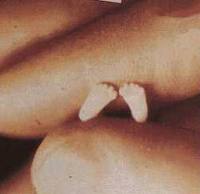 They are about three-eighths of an inch long.  They are about one-quarter of an inch wide at the narrowest point, and about seven-sixteenths of an inch wide at their widest point.  They would fit, with room to spare, on the average man’s thumb nail.  What are they?  They are the feet of an unborn child at ten weeks after conception.  There is no mistaking what they are, for they are clearly human feet, complete with ten tiny, yet perfectly formed, toes.

In 1970, Dr. Russell Sacco, who shared a lab with a pathologist who kept unborn babies in jars of formaldehyde on his shelf, was struck by the highly developed state of the tiniest of these unborn babies.  He took a picture with the feet of a 10-week old unborn baby held between his thumb and forefinger.  This picture, showing two tiny, but perfectly developed feet, each complete with toes and toe nails, powerfully demonstrated that unborn babies are indeed human, even at this very early state of gestation.

In 1974 Mrs. Virginia Evers used this picture in a March for Life on the first anniversary of the Roe V. Wade Supreme Court decision which legalized abortion on demand.  Using this photograph as a model, Mrs. Evers designed a lapel pin the exact size and shape of the a 10-week old unborn baby.  In 1979 a world-wide pro-life symposium in Dublin, Ireland designated these “Precious Feet” as the International Pro-Life Symbol.  Today, millions of these precious feet pins have been distributed world-wide.

These “precious feet” dramatize the fact that abortion destroys a human life, not an inhuman blob of protoplasm euphemistically called a “fetus.”  They also help dramatize the fact that human life is sacred, even in the womb, and should be protected.  It is important to note that the precious feet do not prove these truths.  They simply illustrate them.  With or without this symbol, however, God’s word declares the sanctity of human life.

We know that human life is precious to God because it is made in His image.  In Gen. 1:26 God said, “Let Us make man in Our image, according to Our likeness; and let them rule over the fish of the sea and over the birds of the sky and over the cattle and over all the earth, and over every creeping thing that creeps on the earth.”  Later, in Gen. 9:6, God told Noah that whoever sheds man’s blood shall have his blood shed, because He had made man in His image.  This statement is one reason why capital punishment was authorized by God.  If someone murders another, he has destroyed a life made in God’s image and must therefore pay with his own life.

This provision of God’s will, which predates the Law of Moses, also applies to the unborn because God commanded in the Law of Moses that anyone who caused an unborn baby to die must pay with his own life (Ex. 21:22-25).  In addition to this, God inspired Solomon to write that He hates “hands that shed innocent blood” (Prov. 6:17).  Obviously “innocent blood” may refer to any person murdered by another, but it is also clear that there is no more innocent blood than the blood of unborn babies.  Therefore, we correctly understand that God hates those who murder the unborn by the barbaric practice of abortion.

Since 1973 more than 57 million “precious feet” have been murdered by abortionists in the United States alone.  The souls of these unborn have returned to the God who gave them, but God will not leave the guilty unpunished (Ex. 34:6-7).  All human life, even that of unborn babies, is made in God’s image.  Therefore, it is precious in His sight.  Let us pray that all “precious feet” will be allowed the opportunity to be born.

The Precious Feet pin above may be ordered from Heritage House, a supplier of pro-life materials, through their web site: http://www.hh76.org