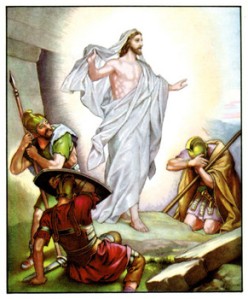 Every year at about this time much of the world gives special attention to what is arguably the most important event in human history.  That event was the resurrection of our Lord and Savior Jesus Christ from the dead.  Even though the Lord had promised His disciples that He would rise from the dead after His crucifixion, we know they were in the depths of despair when He breathed His last breath upon the cross.  They simply did not believe He would rise from the dead.  Some of the women who had been following Him and ministering to Him stood by watching as Joseph of Arimathea and Nicodemus took the Lord’s body from the cross, prepared it for burial, and then placed it in Joseph’s unused tomb.  This was late on the afternoon of Friday, just before the Sabbath began.

Early on the first day of the week, the third day since the Lord had died, some of these same women came to the tomb to administer additional spices to the body.  In Matt. 28:1-7 the scripture tells us that they found the stone rolled away from the tomb.  An angel was sitting on it, and the body of Jesus was gone.  The angel explained to them that he knew why they had come, but that Jesus was not there.  In v. 6 the angel said, “He is not here, for He has risen, just as He said.  Come, see the place where He was lying.”  These are the most pivotal words in the history of the world.  Jesus of Nazareth, the Son of God, the long-awaited Messiah, whom everyone knew to be dead only three days before, was alive, and would always remain so!

The importance of the resurrection cannot be overstated.  The Christian faith stands or falls on the fact of it.  Paul told the church in Corinth, “But if there is no resurrection of the dead, not even Christ has been raised; and if Christ has not been raised, then our preaching is vain, your faith also is vain . . . . and if Christ has not been raised, your faith is worthless; you are still in your sins” (1 Cor. 15:13-14, 17).  Our hope for the resurrection at the end of time rests upon the fact that Jesus came forth from the tomb.  If He did not rise, neither shall we, but because He did rise, so shall each of us when He calls all the dead from the grave (Jn. 5:25-29).

The truth of the Lord’s resurrection was the central feature of first century preaching, beginning with the apostles on the first Pentecost after the Lord’s resurrection from the dead.  After reminding the crowds of Jews that they had killed Jesus, Peter said, “This Jesus God raised up again, to which we are all witnesses” (Acts 2:31).  In v. 36 Peter added that God had made this same Jesus “both Lord and Christ.”  The power of these statements led the people to ask what they must do to be saved.  From that day forward, the fact of the Lord’s resurrection led countless others to obey the gospel just as the 3,000 did on Pentecost (Acts 2:38-41).

Others had been raised from the dead before Jesus was, but none of them was raised never to die again.  This was the point Paul made in Rom. 6:8-11, after telling the Christians in Rome that their baptism had united them with Christ in the likeness of His death, burial, and resurrection (vs. 3-7).  The imagery of replicating the Lord’s death, burial, and resurrection in baptism is not possible if Jesus was not raised from the dead.  Neither is the cleansing of baptism, which Paul calls the “washing of regeneration” (Tit. 3:5), possible if the Lord has not Himself been raised from the dead.

Christians of the first century acknowledged and celebrated the Lord’s resurrection from the dead every time they met for worship, and every time they preached the gospel.  They understood the power and significance of this wonderful event.  We would do well to emulate them in the exercise of our faith today.