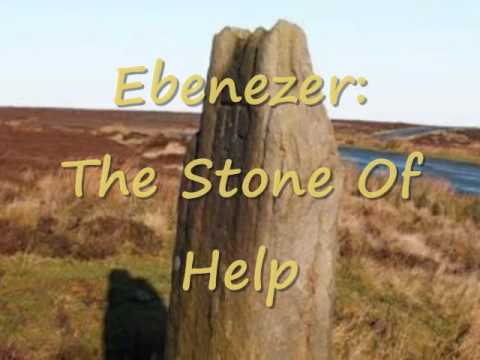 One of the challenges we face when reading the scriptures is trying to understand certain terms that have been transliterated into English.  These instances most often occur in the Old Testament, where Hebrew words, especially place names, are simply anglicized rather than translated.  One such term is the word “Ebenezer,” which occurs three times in the Old Testament.  Twice it refers to an unknown location somewhere between the land of the Philistines and the territory of Israel.  The third time it occurs is in 1 Sam. 7:12 in the aftermath of a great victory over the Philistines.  Here the scripture says, “Then Samuel took a stone and set it between Mizpah and Shen, and named it Ebenezer, saying, ‘Thus far the Lord has helped us.'”

Many of our modern English translations have footnotes that offer either an explanation of such words, or a literal translation of them.  The Hebrew word “Ebenezer” literally means, “the stone of help.”  In the ancient world it was common to erect monuments of stone to commemorate great victories, or to call attention to some significant spiritual lesson.  In this case, Samuel erected some kind of a stone that would be a permanent reminder of what God had done for Israel.

Samuel’s point in erecting Ebenezer was to acknowledge that Israel had come to this position only by the power of their God.  Ebenezer, the stone of help, reminded Israel that they routed the Philistines because God made it happen.  More than this, however, Ebenezer reminded Israel that it was only by the help of their God that they were even in this land at all.  Without God’s help, Israel would have still been slaves in Egypt.  In addition to this, Ebenezer, the stone of help, was intended to be a perpetual reminder so that all generations of Israelites would know that whatever they achieved was by the power and help of their God.

It is this last aspect of Ebenezer that has a timeless application.  Over time Israel forgot their Ebenezer and became vain and rebellious against God.  This attitude is exemplified by the rich fool in Lk. 12:16-21.  He failed to acknowledge God as the source of his prosperity and paid the price for it.  In a similar way, we today may commit the same sin if we fail to remember our Ebenezer.

The most notable example of forgetting one’s Ebenezer is the song, “My Way,” made famous by Frank Sinatra.  This song exemplifies the thinking of those who give no meaningful place to God in their lives, and who relish the idea that they have depended upon no one to achieve success.  Obviously this attitude is not consistent with the teachings of scripture.  Jesus said that God sends his rain on the righteous and the unrighteous (Mt. 5:45), so even the wicked should acknowledge God’s help in life.  Those who are believers, however, must not fail to do so.  Every day we should say, “Here I raise my Ebenezer.  Thus far the Lord has helped me.”