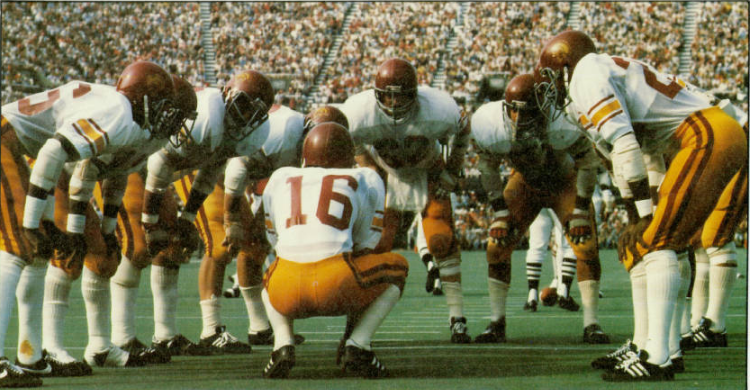 In a recent article in a brotherhood journal the writer related a story told by a Christian university official in a sermon.  This brother used the analogy of a football huddle to teach important lessons on Christian living.  He pointed out that in the huddle the players lean on each other for mutual support.  While in the huddle they communicate a plan to overcome their opponent during the next play.  Finally, he said that the huddle symbolizes a sense of unity, even though each person in the huddle has different talents and assignments.

This brother was not the first to use a sports analogy to represent the Christian life.  Paul used the examples of running a race and boxing in his letter to the church in Corinth (1 Cor. 9:24-27).  These examples were based upon individual athletic effort, which fit into the context of his exhortation to this church.  His point was that each individual Christian must put forth the effort to win in the great struggle against evil.  Nevertheless, Paul was also keenly aware of the corporate, or team, aspect of the Christian endeavor.

He spoke of this aspect in his analogy in which he described the church as a body.  His words in 1 Cor. 12:14-27 are especially important in this regard.  In this passage Paul spoke of the various members of the body, each of whom is different, and has a different purpose in the body.  Even so, he pointed out that the body needs each of these various members in order to function properly.  He underscored this point in Eph. 4:11-16, where he concluded that the body is held together by that which each joint supplies, and grows because of the working of each individual part (v. 16).

These truths suggest that the brother’s analogy of a football huddle fits perfectly into the reality of the Christian walk.  Like football, the Christian walk cannot be successfully navigated alone.  It takes eleven players working together to make a successful football team.  In a similar way, it takes all the members of the body of Christ working together to be successful in our pursuit of eternal life.  In football, each of the players has different skills and different tasks.  If any one of them fails in his assignment, the play fails, and the game may be lost.  In our walk as Christians, we each have differing abilities and gifts from God.  Each of these gifts and abilities are necessary for the success of our team, the church.  If any of us fails to do his or her part, the church suffers for it.

This brings us back to the imagery of the huddle.  For Christians, the huddle occurs every time we gather together for Bible study or worship.  Our first purpose in assembling, of course, is to offer acceptable worship to God the Father, but an adjunct to this is the encouragement we give to each other when we assemble.  Like a football huddle, we pump each other up and gain mutual support.  Like a football huddle, we communicate the plan that God has given us in order to overcome our spiritual enemy, the devil.  And like a football huddle, we experience unity, even though we are of differing gifts and abilities, and have different assignments in the body of Christ.

A football player who misses the huddle will not be able to contribute to the success of his team.  The same is true of Christians.  If we’re not in the huddle, we aren’t helping the church.  The writer of Hebrews said it this way: “And let us consider how to stimulate one another to love and good deeds, not forsaking our own assembling together, as is the habit of some, but encouraging one another; and all the more as you see the day drawing near” (Heb. 10:24-25).  Therefore, let’s huddle up, each and every time the church meets.